Welcome to the Who Wants to Be a Millionaire Wiki!

The wiki all about the series that started in 1998 in the United Kingdom that offers large cash prizes for correctly answering multiple-choice questions of increasing difficulty.

These are some things you can help us with:

May be done in some near future 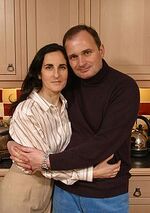 Charles Ingram, a former British Army major from Derbyshire, was a contestant on series 10 of the UK version of the show on the shows scheduled for broadcast on 15 & 18 September, 2001.

After originally winning £1,000,000, the prize was cancelled after it was revealed that he had cheated his way through most of the questions. As a result, the episodes that he appeared in were not actually broadcast until 21 April, 2003.

ABC • A Million Little Things • Agent Carter • Agents of S.H.I.E.L.D. • The Baker and the Beauty • Black-ish • Castle • The Catch • The Colbys • Designated Survivor • Desperate Housewives • Dynasty • For the People • Fresh Off the Boat • The Good Doctor • Grand Hotel • Grey's Anatomy • Happy Endings • The Heiresses • How to Get Away with Murder • Inhumans • Lost • The Middle • Modern Family • Nashville • Once Upon a Time • One Life to Live • Pretty Little Liars • Private Practice • Quantico • Revenge • Roseanne / The Conners • Scandal • Station 19 • Supernanny • Twin Peaks • Who Wants to Be a Millionaire

Retrieved from "https://millionaire.fandom.com/wiki/Welcome?oldid=133497"
Community content is available under CC-BY-SA unless otherwise noted.