AU$250,000
£250,000
€1,000
Paddy Spooner, from Hampshire, England, is notable for being the only person in the world to appear on three international versions of Who Wants to Be a Millionaire? - the Australian, British and Irish versions respectively. He won $250,000 on the Australian version, the same amount in pounds sterling on the British version, and €1,000 on the Irish version. When he appeared on the British show he was the fourth person to win a quarter of a million. 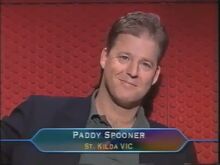 Paddy appeared on the Australian version of Who Wants to Be a Millionaire? on April 28, 1999, in its first season, when the money tree consisted of only 11 questions. He answered 9 questions correctly to win $250,000 and become Australia's biggest winner for one year and four months until Trevor Sauer won $500,000 on August 28, 2000. He also became the only contestant of the show under the 11-question format to see the penultimate question.

Paddy's Run to The Million

Paddy made his second international appearance on the UK version of the show on March 30, 2000. He won £250,000, the same amount of money he won in Australia, but in a different currency. He was the fifth person in the UK to see the £500,000 question.

Paddy's Run to The Million

Paddy made his third international appearance when he was a contestant on Ireland's version of the show in 2002. He only won €1,000 though, as he did not know the name of Pierce Brosnan's baby for €4,000. Flipping an old £1 coin to decide on the answer.

In May 2003 it was claimed that he ran a syndicate where contestants gatecrashed their way onto the show by helping contestants on the phone lines question in return for a percentage of the contestants winnings.

Retrieved from "https://millionaire.fandom.com/wiki/Paddy_Spooner?oldid=136356"
Community content is available under CC-BY-SA unless otherwise noted.