Who Wants To Be A Millionaire Wiki
Register
Don't have an account?
Sign In
Advertisement
in: Top Prize Winners, U.S. contestants from Oklahoma (season 1), Three Wise Men,
and 10 more

Nancy Christy, a middle school teacher from Tulsa, Oklahoma, was a contestant on the U.S. version of the show on May 7-8, 2003. She became the first woman to win a million dollars on the show on May 9, 2003, and was also the last million dollar winner for six years until Sam Murray won the Tournament of Ten on November 20, 2009.

Prior to appearing on Millionaire, Nancy was a contestant on Wheel of Fortune in 1987.

Nancy's Run to the Million 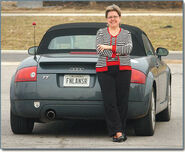 Nancy (right) as one of the Three Wise Men on Todd Kim's Super Millionaire run. She was rather surprised by the question!