Host of Who Wants to Be a Millionaire?

Series 1 - Series 30
Christopher John "Chris" Tarrant OBE (born October 10, 1946) is an English broadcaster, television personality and former radio DJ. He presented the ITV children's television show Tiswas from 1974 to 1981, and was a Capital Radio host from 1984 to 2004. Tarrant is best known for hosting the first version of the television game show Who Wants to Be a Millionaire? in the United Kingdom from 1998 to 2014, and was succeeded by Jeremy Clarkson.

Tarrant's career began in 1964, when he was hired by the since-dissolved television network ATV. He presented ATV Today, a current affairs programme serving the Midlands area of England, until 1982. Tarrant rose to prominence after becoming a co-host on Tiswas, the children's television show broadcast on a Saturday morning from 1974 to 1981. In January 1982, along with Bob Carolgees, John Gorman, Randolph Sutherland and Lenny Henry, Tarrant launched a late-night show, O.T.T., thought of as an "adult" version of Tiswas, but it did not prove popular. Tarrant was a Capital Radio host from 1984 to 2004, presenting the early-morning show Capital Breakfast. The show was highly popular, increasing Capital Radio's audience share in London.

Tarrant hosted the ITV game show Who Wants to Be a Millionaire? from 1998 to 2014, while also providing some audio recordings for some console games, and a tabletop game made by Tiger Electronics based on the show. In total he recorded a total of 592 episodes, where five contestants walked away with the cash prize of £1 million. In 2012, Tarrant began a travel documentary series, Chris Tarrant: Extreme Railways. Tarrant received an OBE in 2004 for his impact on the television industry and for his charity work, in particular his campaigning on behalf of disadvantaged children.

Who Wants to Be a Millionaire?

Tarrant hosted the original British version of Who Wants to be a Millionaire since it first aired in 1998 until it ended in 2014, hosting all broadcast episodes. He was originally intended to host the U.S. version but he declined as he didn't want his children growing up in New York, and the role eventually went to Regis Philbin. Tarrant is known for coining several catchphrases, the most famous two examples being "Is that your final answer?" and "But we don't want to give you that". Regis Philbin later used the former as his main catchphrase, and other international hosts have used variations of the quote. In July 2000, Tarrant signed a contract with ITV to present the show until December 2002. This contract was later extended to 2013.

During his tenure as host, Tarrant recorded a total of 592 episodes. Six people won the million pound jackpot during Tarrant's tenure, including five legitimate winners (Judith Keppel, David Edwards, Robert Brydges, Pat Gibson and Ingram Wilcox) and one illegitimate winner (Charles Ingram, whose cheque was stopped and was found guilty of fraud in a 2003 trial). In 2013, Tarrant was a contestant on The Jonathan Ross Show, and competed in a Millionaire-style quiz. Later that year, it was confirmed that Who Wants to Be a Millionaire? was to come to an end after airing for 15 years on ITV. The channel made the decision to coincide with Tarrant stepping down as host.

Tarrant's final live edition of Who Wants to Be a Millionaire? was a celebrity edition which aired live on 19 December 2013. On the day before, Tarrant pre-recorded two other celebrity episodes that were shown in February 2014. He also appeared in a clip show called Chris' Final Answer, which aired in February 2014. In 2018, ITV aired a revived series of seven episodes to commemorate its 20th anniversary aired from 5 to 11 May 2018, hosted by fellow television personality Jeremy Clarkson. The revival received positive reviews from critics and fans, as well as high viewing figures, leading ITV to renew the show. Tarrant stated he had chosen not to watch the revived series, stating in a TV interview "I did it for 16 years, about 592 shows. I loved it – I had a fantastic time but I don't want to do any more, so good luck. It’s a great show." Tarrant said he would have "politely turned down" an offer by the network to return to the show if approached. 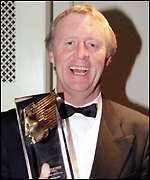 Tarrant on the Millionaire set.