The show was hosted by Lại Văn Sâm from January 4, 2005, until December 26, 2017 when he retired at the age of 60. After the last episode featuring him as the host was aired, there was a selection of who would become the new host. At the end, Phan Đăng was chosen to take over the role as the new host of the show from 2018 to 2020. Đinh Tiến Dũng was chosen to be the new host from 2021.

The show switched to the Hot Seat version called Ai Là Triệu Phú - Ghế Nóng based of the original Australian format from September 7, 2010 to June 28, 2011. Taking audience's feedback into consideration that the original format is more liked and familiar, the show producers decided to convert back to the old format which returned on July 5, 2011.

In some earlier episodes (when the show was taped in Gia Lam gymnasium), the studio used the yellow lighting system (which was used on some WWTBAM international versions such as the U.K., Russia, the U.S.). Later, when the show moved to the S10 studio (later S16 studio) of Vietnam Television Station (VTV), the show began using the red lighting system.

The qualification in the Vietnamese version had some rules that was the same as the U.S. version's with notable exceptions:

Fastest Finger First round existed on the show for 12 years, from 2005 to 2017. There are 10 contestants (6 starting from 2015) playing FFF for the Hot Seat. The original FFF set consists of a computer (from 2005 to 2009) they used a SONY monitor (LG monitor in earlier episode) with a keypad for each contestant to press. However, when the show returned in 2011, the FFF row was upgraded with a touchscreen from Shuttle. When Phan Đăng became the new host since 2018, the FFF was removed, marking the end of FFF row existence after 12 years.

In the earlier episodes, they used LG monitors, but they were replaced by Sony's ones from late 2005 to 2009, and Samsung's ones from 2009 to 2016 (including all Hot Seat episodes). On 2011, the show used new FFF touchscreen monitors from Shuttle for FFF Row. Since 2016, the show used new monitors (brand not shown) for the host and contestant. Since 2021, the show has been using new monitors from Benq. These monitors are similar to the ones used in the UK version design-wise.

There are two incidents on this lifeline, and both of them were calling wrong phone number or wrong people:

A contestant will be asked a series of up to 15 questions with increased difficulty with no time limit. Questions 5 and 10 are known as milestone questions, if they are answered correctly, the value of the milestone question will be the contestant's minimum prize when they answered a question incorrectly. This continues until either the contestant answers all 15 questions correctly, misses a question or decides to walk away with all the money they have won so far. Any of these conditions being satisfied marks the end of a contestant's game.

After viewing a question, the contestant can walk away or continue. If they choose to walk away, they will leave with the money already won rather than guessing the answer. If the contestant answers a question incorrectly, the game ends and all of their winnings are lost, except that the money value on 5th question and 10th question are isranteed. A contestant could leave empty-handed if they give a wrong answer to any of the first five question (which was never on-air since 2011 to prevent home the viewing public from harassing them). By correctly answering all 15 questions, the player will become a "Millionaire".

After the previous contestant finishes the game, the next FFF question will be played. If the player has not finished the game but the episode's time is up, the player will be able to continue their run in the next episode.

Since Phan Đăng's era (2018 - 2020), the Fastest finger first round was removed, contestants are now invited straight to the Hot Seat. The gameplay was the same as Lại Văn Sâm's era (2005 - 2017), except after the previous contestant finishes the game, the host will invite the next contestant to the Hot Seat until the end of the episode.

In total, there are 6 lifelines of the show (not including the Pass lifeline on Ai Là Triệu Phú - Ghế Nóng).

The introduction of the latter two lifelines have been explained as part of the impending relaunch (which would eventually occur in 2021), but was pushed up due to coronavirus. As a result, they continues to be used even when audience returned.[1]

The producers of the show usually celebrate holidays in Vietnam by producing special episodes with specific contestants that the producers will invite to join the show (i.e. On the International Day of Older Persons episode, the show will invite contestants whose age is at least 50). Celebrity contestants may also appear on major holidays (such as Lunar New Year, Valentine's Day and International Women's Day) and they are allowed to keep all of their winnings or donate them to their favorite charity (depend on their choice). Many special episodes before 2014 has couples (or special people) playing in the Hot Seats for the Top Prize.

There are 5 Vietnamese Women's Day special episodes that have celebrities as the player are taped from 2005 - 2009. In 2011, the show invited only 10 stand-alone women playing for the Top Prize.

There are also Vietnamese Teacher's Day special episodes which consists of students and teachers couples (sometimes couples were teachers only). Starting from 2011, the show only invited 10 stand-alone teachers playing for the Top Prize.

Celebrities, at least before December 30, 2014, appeared in the Hot Seat as a couple (although they did some episode with 10 stand-alone celebrities).

There are also episodes where staffs from VTV3 (the channel which airs the show) appeared as a contestant. Only a few were known, they are Khắc Cường, Việt Khuê (both later left VTV3 to working in VTV Sports), Nguyễn Diệp Chi (now working as the director of the show itself, and also currently the host of Đường Lên Đỉnh Olympia (Vietnamese version of Digital LG Quiz)), Nguyên Khang, and Vũ Anh Tuấn (later left VTV3 to working in the Performance Department of Vietnam Television).

Starting on January 5, 2021, the money ladder isn't counted as points anymore, now it is shown with the monetary value, like any other versions.

Contestants who missed their 10th question

One contestant before Mai Thị Thu Thủy also missed the 10th question, but was invited again due to the staff's error.

Contestants who walked away empty-handed

There have been at least 14 contestants in Vietnam who walked away with nothing:

Further information: Unlike most of the international versions, the run of contestants who flunk out on one of the first 5 questions in Vietnam will be edited out on-air and not be shown on TV at all. This is to prevent at-home viewing public from harassing them with nasty comments online (this became common starting from 2011, but it's unknown if they did that from the beginning). However, some runs of the contestants who do poorly than average such as using lifelines on the 1st question, or not knowing an answer to a ridiculously easy question [In Vietnam, the first 5 questions are super easy (usually came with gag answers), as all the contestants who get to the Hot Seat (with some exception) are all guaranteed to win at least ₫2,000,000 (₫1,000,000 before 2012)], will be guaranteed to be uploaded to YouTube (earlier Facebook), where they will be harassed and cyber-bullied mercilessly and endlessly by online users who will post disgusting comments to their videos (and to their Facebook if they have), as well as being mocked by some newspapers, similar to the U.S. version, but much worse. 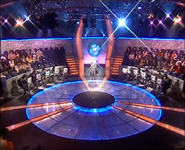 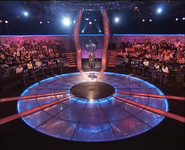 Sixth studio before the show starts

The control room in around 2008